ADA Non-Compliance and the Door Threshold

Thousands of our school campuses constructed over 10 to 15 years ago are absent the door threshold design considerations set forth by the ADA ( American’s with Disabilities Act). Buildings built prior to 1992 still lack enforcement of state and local government building codes and therefore are subject to a myriad of access violations. I would like to focus on door thresholds for this article. 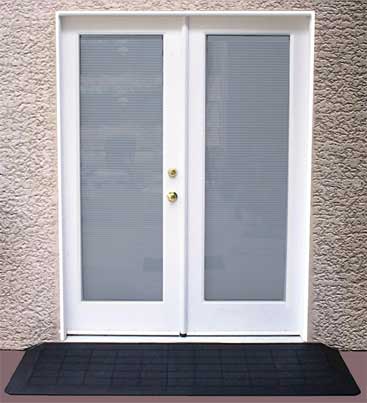 Existing door thresholds under the current model building code requires that they not be greater than a vertical ¼” high, and may be modified with a transition ramp up to ¾” high. If the door threshold is higher than ¾” the requirement, a level-landing is required.

Before getting into the weeds of access building code regulations it is important to understand that in the past, because of problems with water and moisture penetrating framing, many commercial building entrances were constructed with rises at door thresholds to prevent water damage.

“On-grade concrete floor slab systems in the 1967 Uniform Building Code required exterior lath extensions to extend below the floor line, which was before the advent of high-grade sealants.”

This requirement is more than just a ramp when the threshold(s) are greater than ¾” high, and that means a level landing is required for ADA compliance at the door entrance.

A level-landing is the code mandated solution at a door entrance for a threshold modification made at existing doors with door threshold heights greater than ¾”. This is usually performed by saw cutting, jack-hammering, abrading and pouring a built up cement landing.

Defined in (Fig 1) is a typical architectural drawing produced for planning and project bidding for a level landing at an existing door threshold.. However, the drawing does not represent the actual work product required to make a level-landing compliant. For this example we are assuming, for this present discussion, that the substrate out from the door is level, or no greater than 2% slope in any direction with a 1” high threshold.

In this instance there is the typical requirement, as in most cases, a 60” x 60” “maneuverable” level surface adjacent from the existing door. However, California, is one sate that requires there be 42” from the door opening (as opened) as it is perpendicular the door frame.

This is required so that a person in a wheelchair will not be forced by gravity to roll in any direction while accessing the door hardware. Thus, in California most landings will extend out from the threshoild 72”,instead of the typical 60” under the federal standards.

Absent a level-landing will result in physical difficultly of using a door system, opening it and maneuvering into or out of a doorway, when operating a wheelchair. These are typical door hinge systems that do not have automated operating systems.

Also, important to understand in every case there is the need for “strike-side” level clearance. In other words, this level landing must extend past the strike-side so that a wheelchair is on a level surface adjacent the door operating hardware. This is typically 24”. Thus with a 36” door opening and 24” strike-side clearance equals a 60” wide maneuverable level surface at the door entrance.

While the required “maneuverable level landing” area may differ with various “path of travel” access and door approaches, in most conditions we have found this example representative of industry standards.

To make matters worse as shown below when pouring cement there is the ever present factor of material slump. Thus, for a 1” high door threshold modification on a typical 3-0 door system (36 wide-door) would demand an area of 113 sq. ft. of a new concrete footprint to make this level landing for a 1” high threshold. (See Fig. 2)

For this example this occurs when the material is allowed to flow or slump without any expansion or construction forms, as the surface cannot exceed more that 2% in any direction. For simplicity sake this is calculated at no more than ¼” drop in elevation for every linear foot out from the threshold.

In the converse, when a molded product, such as a level-landing, is utilized for the same door threshold height of 1” high, the need is restricted to only 42 sq. ft. for a footprint outside the door. (See Fig. 3) In every instance, where a landing is constructed, it is required that there be a 1:12 or 8.33% ramp or transition coming off this maneuverable level surface on all three sides.

Modular Landings and Ramping systems are the newest recognized architectural element by the Construction Specifications Institute and the MasterFomat divisions. A new designation has been recently dedicated a separate division category of 10 74 49 Modular Landing and Ramp Systems.

Thus, we will be seeing more about modular landings for ADA compliance in the coming years.